Our team was brought in to help an entertainment technology firm improve the user experience of their internal residuals application. This app was used by studios to enter actor and crew information and ensure that the appropriate residual payments were distributed. When our team came into the project, the client's development team had already began work on the new solution. However, after internal testing, the project stakeholders were not happy with the user experience and our team was then brought in to help redesign and finish development. 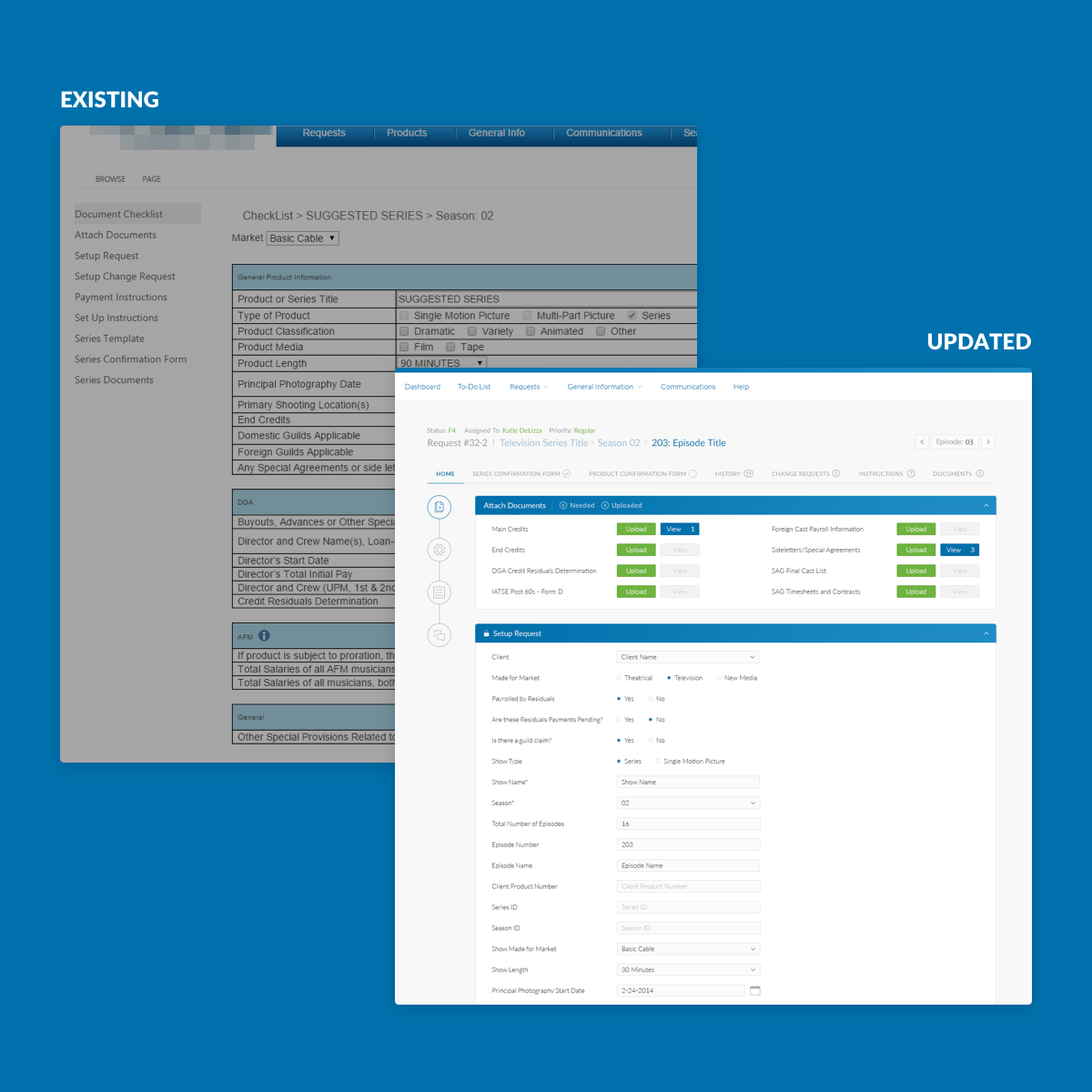 The primary focus of this project was to revamp the existing interface of the application, while trying to maintain the core structure and feature set as much as possible. This posed a challenge around the user flow side of the design, as the code was so complex that any changes to how the forms and data worked would have major implications on the development team.

Our first task was the understand how the current solution worked. After an initial walkthrough of the application, we were allowed to access the dev environment to try it out for ourselves. From here, I took screenshots of the 70+ unique screens the application had, and our team began work figuring out the flow of the site and its current functionality. After a couple weeks of back-and-forth with the client, we had a pretty good handle on things and began work on some initial wireframes.

An initial site flow diagram I made to help our team more easily understand the scale of the site. 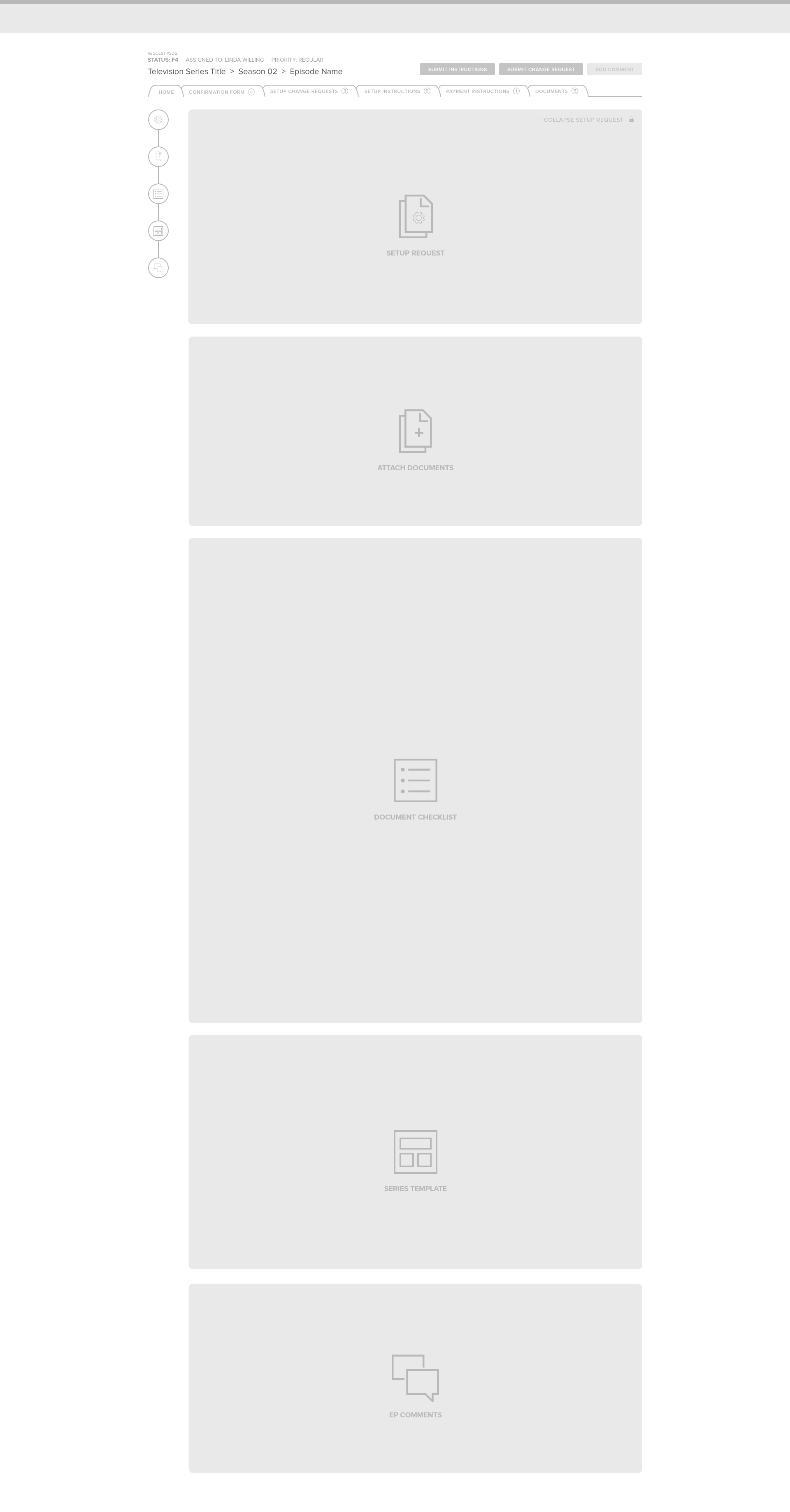 Even though the site structure was pretty much set up from the start, we still went through 5 rounds of basic wireframing to get the content on the main request screen as solid as possible. Most other pages on the site consisted of related forms and tables of data, so we really just focused on the flow of this single screen before jumping into designs and testing.

I ended up with roughly 50 unique screens when all was said and done - most of which include extensive forms or interactive tables of data. Since the core functionality of the application was determined by the client's development team, I was in charge of implemented dozens of UI and quality of life changes across the platform. This included major things, such as an overhaul of the main request screen to allow users to more easily see key information at a glance, to small changes such as clearly indicating if specific forms were ready for approval. These changes had a drastic impact on the usability of the site and the speed at which users could complete their day-to-day tasks.

On-site testing was conducted over the course of 3 days with the client stakeholders and real users of the existing residuals platform. One-on-one interviews were conducted with users from the main user segments where we had them walk our team through their day-to-day workflow in the current system, and invited them to help brainstorm what their ideal solution would look like. On the final day, we held group feedback sessions where users were show initial designs for the new solution - since the client's development team had already begun building out the new application before our team was brought in, we had some updated designs based on those features already built out.

After the initial testing sessions, all subsequent testing has handled by the client's internal UX team. We had constant contact with this team up until the end of the project, and implemented their feedback into the application's design.

This was the one of the first large-scale project that I had not only lead the design effort on, but was the sole designer on the team. I learned how to walk through user flows with stakeholders and developers, how to moderate user testing, and created my first full InVision prototype. I also learned a lot about taking feedback and criticism, and how to affectively translate that into a better end product.